Wood decks are a complicated subject. Almost every house has a front porch or a rear deck that is wood-framed, especially houses built after 1970. So why are wood decks built 30 years ago a lot different from those decks that are built to code standards today? The answer involves understanding a little bit of recent history about the changes that have occurred over that timeframe.

Most people don’t realize that there was a small epidemic of deck collapses that started in the 1990’s and 2000’s, and helped to change the building code standards for wood-framed decks. And the problem with deck collapses is that they don’t happen during a storm, like a tree falling down, when nobody is around. Typically they happen when your family and friends are over for a get-together, and there are a lot of people on the deck. Most deck collapses happen when the connection of the ledger board to the main house becomes deteriorated and fails. Sometimes the anchors are not strong enough. Sometimes they are severely corroded and fail. Sometimes the connection between the wood ledger board and the intersecting floor joists fails. When this type of failure happens, it usually happens with a group of people on the deck, and can trap people between the failed deck and the house wall. Below is a typical example of this type of failure. 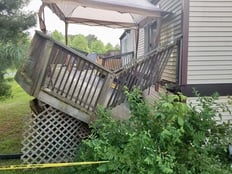 Deck collapse in Germantown, MD in 2019

The good news is that the building code changed to help eliminate the possibility of these types of failures. The bad news is I run across contractors today that still build decks the same way for the past 30 years, before the code changes. It’s important that the ledger board, which connects all of the deck joists to the house, have a metal flashing over the ledger board. This helps to prevent water from getting behind the ledger board, and corroding the metal anchors and deteriorating the wood. Also, tension ties should be used in order to provide a solid connection between the main dwelling structure and the deck structure.

In the late 2000’s, construction products were required to either have low or no VOC’s (Volatile Organic Compounds). This was great for the environment, and long-term I think it’s a positive step. Pressure-treated wood used to have some really nasty chemicals in the wood, which can leech out into and pollute the ground as the wood deteriorates. But the biggest problem right now is that the chemists for wood suppliers haven’t been able to find an adequate substitute for those hazardous chemicals, which means the pressure-treated wood now will not last as long in weather as the older wood. Because of this, the building code was changed to help this. The biggest change was that wood posts are required to be set above concrete footings, usually round in shape. Many contractors still today set the wood posts in the ground, which accelerates the deterioration and rot of the wood.

Bob Mason has been practicing engineering for almost 20 years in a practice focused only on buildings and residential dwellings. With years of forensic engineering and renovation construction experience, Bob has already observed and helped to repair many of the typical issues of your particular building or home.

Reliable Structural Engineers LLC is comprised of high expertise structural engineers who focus on common-sense solutions for small and large projects while simultaneously delivering Ritz Carlton level customer service to our clients. Since 2015, we’ve helped hundreds of clients with various projects. Please contact us today to discuss how we can help you with your structural engineering needs.